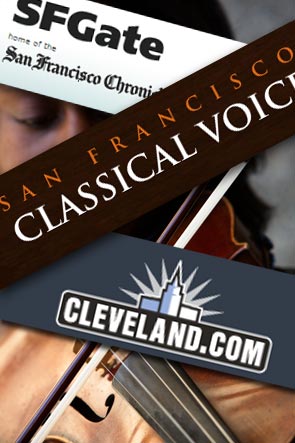 …This time Dawn Harms was at the helm of the orchestra with Salern-Sonnenberg, Candace Guirao, Cassandra Lynne Richburg, and Susan Babini as the featured quartet in Elgar’s Introduction and Allegro. They played with breathtaking passion. Though the communication flowed in different paths, the excellent sense of ensemble was maintained even as the solo quartet took rhythmic liberties.
~Be’eri Moalem- San Francisco Classical Review (May 19th, 2011)

The soloist was Cassandra Lynne Richburg, who seemed to have been the motivating force behind the program, and she made a superb case for the piece, giving the main theme a strong melodic profile and dispatching the rapid-fire solo passages with striking aplomb.
~Josh Kosman- SF Chronicle (May 5th, 2003)

…Salerno-Sonnenberg and Babini again shone throughout the piece, as did principal violist Cassandra Lynne Richburg. The two outer sections are melodic bookends to a delicate waltz and elegy, the latter being the spot where Richburg really made a lovely contribution.
~Mark Rubio- San Francisco Examiner (January 30th, 2011)

… There were many places throughout the program that called for solo viola Too often the passages were short lived, but it was a true pleasure to hear Cassandra Lynne Richburg play them. She has a warm, intimate, yet subtly strong quality to her playing that is always a joy…
~Robert McClintock- Classical Profile & Review (December 6th, 1996)

…Barbini, the orchestra’s concertmaster, and Richburg, its acting principal violist, proved an excellent team for the feature parts of the Sinfonia. Their dialogues were spirited, intelligent and passionate. Respecting each other and the rest of the orchestra, they played handsomely without even a hint of showiness. They were most impressive in the high-energy final movement.
~Robert A. Masullo- Sacramento Bee arts critic (Friday, November 10, 1995)

One high point was clear classicism: Lynne Richburg, the superb assistant principal violist of the orchestra, joined Geffrey Simon and her colleagues as the soloist in the first two movements of Telemann’s Concerto in G… her rich tone in the first was a reminder of the beauty of her instrument: her strong, lively playing of the faster movement was a reminder of the quality of Telemann.
~William Glackin- Sacramento Bee (Monday, April 25, 1994)

We could witness the fine abilities of its principal players…Principal violist Lynne Richburg proved the instrument’s worth. She played with a full and clear tone, and humbly accepted applause.
~Robert McClintock- Sacramento Bee (Sunday, November 25, 1990)

Lynne Richburg lifts the viola from its usual obscurity to the first ranks of the great instruments. She fills the hall with glowing sonority, speaking with an original voice most persuasive… in Miss Richburg’s hands the viola has the depth and force of a cello, coupled with the delicacy and precision of the violin…Performers like her are rare and valuable, the foundation stones of great orchestras…
~Gregory Cox- Sacramento Bee (December 6th, 1990)

The guest soloist, violist Lynne Richburg, winner of the Young Artist’s competition, won a well-deserved standing ovation from a crowd of about 700… her stage demeanor and seasoned command of the instrument through the four movements of the Viola Concerto in C minor bay Bach served as a reminder that dedicated and talented young people are waiting to be heard. She deserves to be invited back.
~Tony Joseph- Ventury County Star Free Press (Tuesday, August 2nd, 1988)

Ms. Richburg possesses an uncommonly rich tone and a very sure, polished technique. Her instrument seems like an extension of her self, as much a part of her as the vocal chords. Such finesse in one so young gives every promise of a brilliant virtuoso career ahead.
~Savannah News (Sunday, Feb 1 1987)

…Richburg’s assertive, full sound carried the modern music’s the modern music’s unsettling tones well. There were occasionally those wispy sounds violists can make, but they were nothing compared to the mood creation that Richburg achieved.
~Paul Calouri- Montecito Life (Thursday, August 23, 1986)

Lynne Richburg’s recent guest solo performance with the Detroit Symphony’s Civic Orchestra, under the baton of Joseph Striplin, was marked with the luminous art of a near- future master violist- evincing a luscious viola tone in the Johann Christian Bach “Viola Concerto”…an extraordinarily talented young violist with a sincere and serious approach to her music, Ms. Richburg immediately captivates with a fine sense of musicianship; performing with a wealth of feeling sensitivity and lovely tone, plus good intonation throughout. Conductor Striplin and Ms. Richburg, together, molded a performance of artistry and balance, taste and spirit to the musical score. Her Bach was thoroughly imbued with baroque-classical spirit. Bravo, Lynne!
~ Dean Nolan- Michigan Chronicle (February 1985)

I am currently taking new viola students. If you are interested, please feel free to contact me.